It seems like everyone is doing yoga these days, but now so is Lebron James.  Your gym partner, your neighbor, and that cute co-worker you’ve had your eye on have all been telling you how awesome yoga is. And now, you just found out that your mom is doing it too.

So what the heck is yoga? And why is everyone doing it?

So what is yoga? What does it mean?

Defining the word yoga is sort of like defining the word sport. There are many different types. People participate for many different reasons. And some types, though secular now, have their roots seeped in religion (think Olympic games, Lacrosse, or the Mayan ball game, which is kind of like basketball, but it was one on one and the loser was sacrificed!)

Yoga is a system that has evolved many times over several continents, through various religions, and different cultures, through the course of thousands of years – producing several different strands, meanings, systems, and practices.

Read more about the history of yoga here.

Today, yoga usually refers to the mental, spiritual, and physical system of achieving a healthy well being.

The journey through this system is often filled with dualisms, such as strengthening and stretching your muscles at the same time.  You will often find the word yoga defined as “union,” and you can think of it as a ying yang.

We like Sage Roundtree’s explanation in her book, The Athletes Guide To Yoga:

“The ultimate purpose of yoga is to see your own true nature, to know yourself for what you are. With this knowledge, you come to recognize that your personal self (with a lowercase s) is part of a universal Self (with a capital S).”

Traditional yoga is basically the process of achieving an enlightened state. Some call this state happiness. Others call it zen or nirvana.

For some it’s a religious thing. For others it’s a spiritual thing. It can also be a state of mind such as clarity. Know that feeling when you feel like you are a part of something greater? Like attending a big sports game or seeing a show and singing along with hundreds of people? It’s kind of like that.

For most of yoga’s history, the process of achieving this heightened state was through seated meditation, although there were other ways as well, such as through wisdom, devotion, and good deeds. Over time, in order to reach this heightened state more efficiently, several “tools” were added to the yogi’s arsenal. First came deep breathing. Then, a few hundred years later, came physical poses.

It is thought that by mastering control of your body through difficult poses (yoga exercises), you would be better prepared to exhibit control over your mind as well – eventually preparing yourself for meditation.

Besides these tools, there is an entire system of lifestyle choices (think of them as mantras akin to the 10 commandments) that one call follow in order to help achieve that state of enlightenment. These additional tools were all created to help you achieve that “union” with your surroundings in your quest for nirvana.

Check out our complete guide to the 8 limbs of yoga and the mantras, rules, and systems that make up yoga.

Does one have to go through all of these mantras in order to achieve their goals? You can be the judge 🙂

Yoga studios around the country focus on different aspects of that system. There are strands of yoga such as Kundalini Yoga that put as much emphasis on how you live and what you can eat to the physical aspect of yoga.

Learn more about the different types of yoga here and how to find a class that is right for you.

At Body By Yoga, we focus on the physical exercises part of the yogi “toolkit.”

To us, yoga is a low impact workout system that builds strength, improves balance and flexibility, and speeds up muscle recovery. In other words, we focus on the physical benefits of yoga rather than the spirituality part – and we certainly never tell you how to live your life.

Physical yoga poses have been developed over hundreds of years and if something is that old, there has to be something to it. But don’t take our word for it. Check out the scientifically proven benefits of yoga workouts and learn more about how you can use yoga to achieve your personal fitness and mental goals.

The Science of Rest Day Recovery 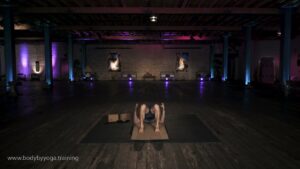 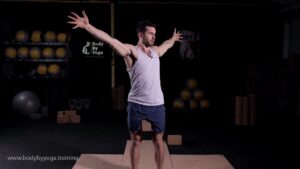 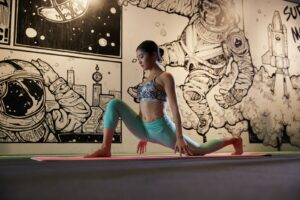 A simple way to build glute strength without traditional weights or squats? Let’s start in bridge pose and heat up the back of the legs.

There are advantages to practicing either in the morning or the evening, but it ultimately comes down to your individual goals and daily schedule. Yoga

A stiff thoracic spine will cause the neck, back and shoulder muscles and joints to compensate by working harder which can lead to injury. Prevention

We want to keep you safe!

Please consult your physician, assess your fitness level, and follow all safety instructions before beginning any exercise program, nutrition plan, and/or using any equipment.

Body By Yoga provides a variety of exercise programs, some of which are physically demanding and high-intensity in nature. For this reason, you must listen to your body, use common sense, take breaks, and hydrate as needed to avoid injury. If at any time you feel any discomfort, pain, dizziness, light-headedness, shortness of breath, or nausea, stop exercising immediately and consult your physician. Incorrect or excessive training can result in serious injury or death.

When doing any outdoor workouts or activities, be aware of your surroundings and avoid anything that could hurt you or disrupt your exercise, especially when walking or running in public areas such as sidewalks and streets.

If you have any unique or special medical conditions, such as if you’re pregnant, have diabetes or asthma, or if you have a history of knee, ankle, hip, shoulder or spinal (back or neck) problems, you must consult your physician to understand all potential risks and complications of using our exercise programs, nutrition plans, and/or equipment, and receive approval from them to proceed before beginning. Failure to do so could result in significant injury to you and others (including, if applicable, your unborn child). By engaging in any exercise program, nutrition plan, and/or using any equipment, you assume all dangers, hazards and risks of injury or death.

SAFE USE OF EQUIPMENT

FITNESS EQUIPMENT PRESENTS HAZARDS WHICH, IF NOT AVOIDED, COULD CAUSE SERIOUS INJURY OR DEATH

Certain programs may utilize equipment, such as yoga mats, yoga blocks, yoga straps, chairs, foam rollers, and other equipment which, if not used correctly, could lead to serious injury or death. Carefully review all safety, care and use instructions and manuals prior to beginning.

For your safety, you must:

Use any equipment shown in the workouts only as demonstrated, using proper form.
Inspect any equipment for wear or damage prior to each use and refrain from using any equipment that appears damaged, worn or defective.
Keep children, pets and any other obstacles away from equipment and exercise area at all times.
Always use a secure, proper, and stable anchor for any equipment that requires hanging or attaching.
Always exercise caution during use of any equipment to make sure you do not lose your grip or control, such as making sure your hands are not wet or sweaty.
Ensure exercise bands are firmly secure and assembled to prevent slipping, snapping, recoiling and injury to yourself or anyone else.
Ensure your workout bench and pull up bar is stable, strong enough to hold your weight and does not move during use. If you do not think you can safely perform exercises with your bench or pull up bar, or you do not have the proper equipment, you should do the modifier exercises instead.

To the fullest extent permitted by law, Body By Yoga and its parent, affiliate, and subsidiary companies will not be liable to any person or entity for any injury, death, damage or loss caused or alleged to be caused directly or indirectly by any exercise programs, workouts, nutritional supplements or plans, equipment (including without limitation the Body By Yoga mat and Body By Yoga blocks), advice or any other products, services or materials.

By checking the box and clicking “Accept”, I acknowledge I have read, understand, and agree with this warning.