Why We Do Not Use Sanskrit 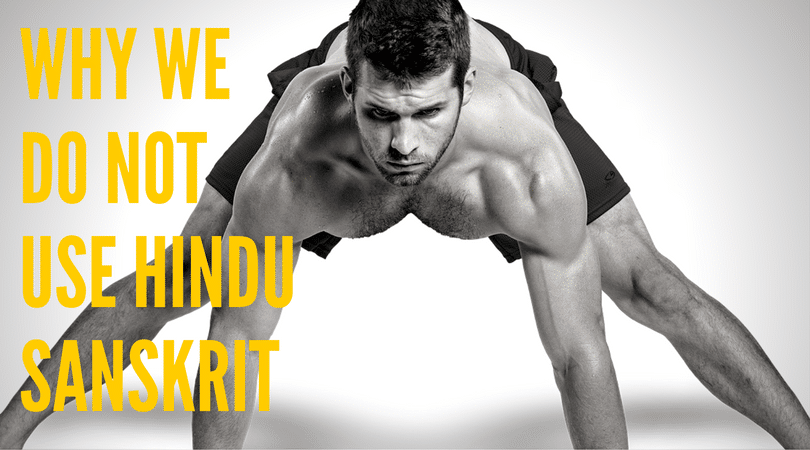 This blog post originally appeared on Man Flow Yoga, which is Dean’s wesbsite for men and women who want more hands on training and a greater variety of workouts. Check out Dean’s private library of more than 300 yoga workouts at Man Flow Yoga here. Body By Yoga customers can save 10% by using the code BODYBYYOGA10.

On October 22, I had an interview on a podcast. The main goal was to discuss the benefits of yoga as they pertain to men. The podcast in question is The James Swanwick Show. (You can listen to the full recording on iTunes or watch the video by clicking here.) James started off the interview by asking me to list 5 benefits of yoga. I was prepared for that. Off the top of my head I rattled off flexibility, core strength, isometric strength building, testosterone production, and stress relief. James then asked something that I wasn’t really prepared for. He caught me off guard with THIS question. “Here’s my issue, here are some things I don’t like. I don’t understand all the weird names that people are saying… what is it?”

I answered his question, and told him WHY yoga instructors use Sanskrit. But I didn’t have enough time on the podcast to talk about my comprehensive thoughts on the use of Sanskrit in yoga classes. The question caught me off guard as it was, and there are a lot of things to consider when it comes to talking about the use of Sanskrit in yoga classes. Personally, I believe that it is one of the main reasons why so many people are turned off by yoga. In the next few paragraphs, I talk about my personal experiences with Sanskrit, as well as its use in yoga classes by the majority of yoga instructors. My thoughts all lead to one statement: Stop Using Sanskrit.

It’s safe to assume that the majority of people will defend their use of Sanskrit in yoga classes as a way of paying tribute or respecting the original source of the yoga postures. But here’s the thing: Most poses that exist in yoga today were not invented until the early 20th century. Yoga as we know it today is a combination of multiple disciplines, including such diverse sources as British gymnastics and Indian martial arts. This is not to say that some poses that we have today have not existed for hundreds of years. Variations of cobra showed up as early as the 11th century, and the seated posture (lotus) that is so commonly associated with meditation and yoga has existed for thousands of years. (Evidence can easily be traced to 2,000 years ago, if not more.)

However, there is no such thing as an Ancient Indian warrior doing a sun salutation. The sun salutation didn’t even exist until the 20th century, when yoga started to be seen more as a form of physical fitness in addition to being a lifestyle. People may have doing squats for thousands of years, but they probably did not gather on top of a mountain and watch the sun rise while doing a chair pose together.

Let me talk about the first time that I heard the poses.

Then I woke up 15 minutes later. Most of the class had already left and the instructor was left with one lone student discussing the class. Anyways… here’s what I took away from that experience:

Fast forward a few months, to when I started teaching my lacrosse team and putting yoga videos on YouTube. I’m embarrassed to say this, but if you look back at some of my earlier videos you’ll find that I did indeed use a significant amount of Sanskrit. I did so because I believed that doing so was the proper terminology. I was still being sucked in to the yoga culture, and had yet to develop my own identity (an identity and an approach that ultimately led to what Man Flow Yoga is now). I was still embarrassed to use the Sanskrit terminology outside of yoga circles. At other times, I thought the names were so cool that I simply had to use them. This pose is called utkatasana (pronounced ood-kah-tah-sah-naa)? That sounds f***ing awesome, why wouldn’t I say it?

Let’s fast forward some more, to the present day. About 3-4 years later, all of which were very intensely focused on yoga, and I now have years of experience and immersion in yoga world to talk about the use on Sanskrit. What is the REAL reason that people are using Sanskrit? My interpretation is the majority of Sanskrit-users are doing so in order to:

Here’s what I think when I hear Sanskrit being used now.

The reason why I started to reject the use of Sanskrit stemmed from the realization that the primary goal of mainstream yoga was not to improve mental OR physical fitness. Yoga instructors essentially pay to get certified in a course that spends very little time on human anatomy, and that’s understandable, because the focus of mainstream yoga is not on physical fitness; it’s on other things, such as self-empowerment, community, stress-relief, and meditation. That’s fine, but isn’t what I was personally looking for. I assumed that there were many like me, so I created Man Flow Yoga because I wanted a great workout for my core strength, flexibility, and balance. Speaking Sanskrit didn’t fit into that equation either. Although I do consider myself a language connoisseur (I speak Turkish and understand most of its dialects, Spanish, and some Persian) it didn’t belong in my fitness class. And it’s turning more people off than just me. James Swanwick is one of those people, and I’m sure there are countless others.

Beginner’s Yoga with Bodyweight Exercises For Strength and Weight loss

How To Do A Plank