How To Use Yoga To Increase Shoulder Mobility For Weight Lifting

Yoga and the Weightlifter

The shoulder is one of the largest and most complex joint systems in the body. In the shoulder, the round, protruding head of the humerus fits into the concave opening of the scapula, creating what is known as a ball-and-socket joint. Because of this construction, the shoulder is the most mobile joint in the body.

But with this increased mobility also comes a greater risk for instability.  A network of nearly twenty muscles work to stabilize the shoulder by holding the head of the humerus in place and assisting in moving the shoulder through its range of motion. Shoulder stabilization can be increased through strengthening with weightlifting and yoga.

The types of range of motion in the shoulder are:

Flexion: Shoulder flexion is performed when the arm lifts forward from the midline up to 180 degrees. The shoulder is in flexion in yoga poses such as downward facing dog, puppy pose and any other pose where your arms raise over your head.

Internal Rotation – Internal rotation is performed when an extended arm rotates from palms up to palms down position. Returning to the example of warrior two, the shoulders are internally rotated as the palms are facing the floor. The shoulder is also internally rotated in several arm variations, such as cow face pose or reverse prayer hands position.

Elevation and Depression – The shoulders are also able to elevate by lifting toward the ears and depress by lowering down away from the ears. Shoulders may elevate in yoga poses that require arms to be raised overhead. They are depressed in poses such as upward facing dog and other chest opening positions.

Many movements in the shoulder involve more than one range of motion occurring simultaneously. When taking the cactus or field goal post arms variation of a pose, the shoulders are in both abduction and external rotation. Because the muscles of the shoulder must work together to maintain maximum stability and mobility, it is important that strength training targets all muscles in the shoulder complex.

Anatomy of the Shoulder

The larger muscles in the shoulder complex are responsible for the bulk of shoulder movement.

These muscles are assisted by several other muscles in the arms, chest and upper back to complete the movements of the shoulder. Additionally, the four muscles of the rotator cuff – supraspinatus, infraspinatus, subscapularis and teres minor – are responsible for keeping the head of the humerus stabilized in the shoulder socket.

Even though there is no movement, the shoulder muscles are being strengthened as they contract to hold the arms in place. This is a gentle and effective way to build strength and stabilization without the impact of repetitive exercises.

The muscles and bones of the shoulder are also strengthened in yoga during arm balances and inversions. In these positions, the muscles move into isometric contraction to balance the body.  Weight bearing also triggers the bony structures of the shoulder to adapt to the weight, which stimulates the growth of new bone cells. This, in turn, increases bone density and stability in the shoulder area.

The deltoids usually receive a lot of attention when weight training the shoulder. Because they are involved in so many shoulder movements, most weightlifting exercises work the deltoids in some way. Weightlifting and resistance training can also tend to target the other large shoulder area muscles like the trapezius and rhomboids because muscle bulk and definition can easily be seen in these areas. Because of this, the smaller and less visible muscles of the shoulder complex, particularly those of the rotator cuff, can often be undertrained.

With weightlifting in particular, rotator cuff strength is particularly important because of the lifting and repetitive movements involved. In competitive weightlifting events, lifters are often quicky lifting heavy weights to an overhead position. This places enormous strain on the shoulder complex. When the rotator cuff is weak, the shoulder may not be able to move completely through this range of motion, and there becomes an increased risk for a dislocation injury.

Yoga can complement weight training and strengthen the rotator cuff through isometric holds and arm balances. In these positions, the rotator cuff muscles contract to hold the head of the humerus in place, which builds greater overall strength and reduces shoulder instability. Additionally, chest opening poses like camel or wheel also provide a stretch and increased flexibility to the often-used deltoids.

Yoga is also an excellent active recovery for weightlifters. Those who are in a strength training routine understand that recovery is extremely important in order to see progress. It is typical for strength training to be done in a rotation with certain muscle groups being trained on a dedicated day.

While it is necessary to rest the muscles after an intense or strenuous workout, there are also numerous benefits to performing a low-intensity activity like yoga on a recovery day. Active recovery like yoga can help decrease muscle soreness, increase blood flow to the muscles and speed up the removal of metabolic waste from the muscles. All of this helps reduce the propensity for injury.

Yoga for Flexibility and Joint Health

If muscle soreness or tightness does occur from strength training, yoga can help alleviate the stiffness through gentle stretching. Weight training can cause a shortening in the muscles, which can limit mobility. Yoga helps counteract the shortening by opening the muscles and creating length, thus helping to create stronger and more balanced muscles.

Yoga can also circulate synovial fluid in and around joints and cartilage. This fluid is a lubrication to the body’s joint complexes, acting as a shock absorber for impact to the joint. Too much or too little fluid can cause pain and inflammation. For competitive weightlifters, using yoga to help regulate synovial fluid can offer another line of defense against injury during the high-impact, repetitive motions required in their events.

Try these yoga poses to complement your weightlifting routine for added shoulder strength and mobility:

To enter child’s pose, kneel with your knees about hip-width apart and allow your glutes to rest on your heels. Slowly begin to hinge forward, your torso dropping between your thighs, until your forehead touches the floor. Bring your arms to rest alongside your thighs with the palms facing up. To take the extended version of child’s pose, allow your arms to extend in front of you, resting on the floor palms down. Press your palms into the floor for a more active stretch.

Eagle pose is a standing balance and bind in which the free leg wraps around the standing leg while the arms simultaneously wrap around each other. Eagle arms can be incorporated into many other base poses to increase opening across the back of the shoulders and stretch the rhomboids, which move and stabilize the scapulae.

To perform the eagle arms bind, extend your arms out in front of you. Begin to cross your right arm over your left and bend the elbows to slightly more than a 90-degree angle. Allow your right forearm to wrap behind the left so that your palms are touching. Press your palms together to increase the stretch and hold for a few breaths. Release and repeat with your left arm on top.

Downward facing dog is a multipurpose pose that is part arm balance, part inversion and part restorative. While it can be a used as a rest pose during practice, it is also great to actively stretch and strengthen the shoulders. In this pose, the anterior deltoids assist in lifting the shoulders and arms over the head, assisting in the opening across the chest and shoulders. The muscles of the rotator cuff are strengthened as they stabilize the joint in external rotation.

To perform downward facing dog, begin on your hands and knees in a tabletop position – your wrists should be directly under your elbows and your knees directly under your hips. Engage your abdominals and fully extend your legs to lift your hips into the air. Your body should resemble an upside down “V” shape. Allow your hips to continue to raise toward the ceiling while pressing through your heels and hands.

Camel pose is a backbend that engages the entire body but offers an opening of chest and shoulders. The rhomboids and middle trapezius work in conjunction to bring the shoulder blades back and down; the pectoralis minor lifts the rib cage; and the posterior deltoids extend the upper arm.

To enter camel pose, begin kneeling with your legs hip-width apart. With your core engaged and hips forward, begin to arch your back, then, carefully, reach one hand at a time back to grip your heels. While holding the heels, actively press your hips forward and allow your chest to lift toward the ceiling. Your head should remain in a neutral position or gently lowered back.

Thread the needle is a variation of child’s pose in which one arm is “threaded” under an extended arm. This pose offers an opening to the back of the shoulder in the threaded arm and, simultaneously, strengthening in the shoulder of the extended arm. In the threaded arm, the rhomboids are allowed to stretch and open. In the other arm, the anterior deltoids, which extend the arm in front of you, and the muscles of the rotator cuff, which keep the head of the humerus plugged into the shoulder socket, are all being strengthened as you hold the pose.

To enter thread the needle, begin in an all-fours tabletop position. Turn your torso to the right while sliding your left arm under the right arm. Lower your left shoulder, letting your left ear and cheek rest comfortably on the floor. Extend your right arm over your right ear until your fingers reach the floor. Hold for a few breaths and then repeat on the opposite side.

Yoga can be used as a warm-up or cool down in conjunction with a weight training routine. If you are practicing yoga before weightlifting, chose dynamic movements or flows such as plank to downward dog or sun salutations to stimulate blood flow and increase energy. In a cool-down yoga practice, chose more static poses or hold in stretches like forward fold or pigeon pose. This will help prevent muscle tightness or soreness following your workout.

Best Body By Yoga Programs To Combine Yoga With Weightlifting

Am I Too Old for Yoga? 6 Yoga Poses That Age Well and How to do Them

Can Yoga Cure Low Back Pain? 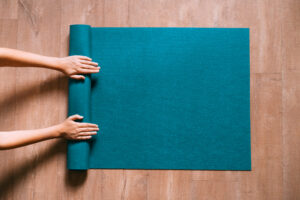 The Best Yoga Mat for You There are so many yoga mats to choose from in the world. When you walk into a store looking 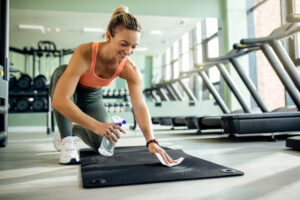 How to Clean a Yoga Mat

Is Your Yoga Mat Clean? Do you know how to clean a yoga mat? Did you know that some yoga mats contain eight times more 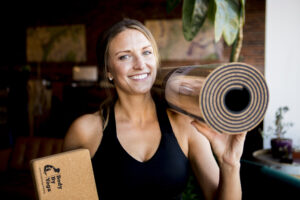 What is the Best Thickness for a Yoga Mat?

The Thickness of Your Yoga Mat What is the best thickness for a yoga mat? Did you know that the thickness of your mat really

Read More »
October 13, 2021
Powered By MemberPress WooCommerce Plus Integration
0
0
Your Cart
Your cart is emptyReturn to Shop
Continue Shopping